Bill Parkinson still flying at 81 years old finally steps down as the Chairman of Phoenix Aviation.

At the age of four, young Bill managed to get his head wedged in the perimeter railings outside Newtownards Airport, Northern Ireland. Instead of panicking Bill spent hours watching the aircraft before it was noticed he was missing and rescued by a distraught mother and the local fire brigade.

It wasn?t for some 18 years later that Bill realised his childhood dream and was taught to fly in a battered Tiger Moth at Wilson Airport by two ex RAF pilots who fought in the Battle of Britain. He earned his commercial licence while working for the Kenya Police, where he served for fourteen years and rose to the position
of Chief Inspector in Special Branch before taking up full time work as a pilot for his old friend Bosky.

In 1994, Bill opened the doors of Phoenix Aviation, a maintenance and charter company operating from Wilson Airport. Phoenix Aviation focused on charter and Air Ambulance Services providing first generation Jet aircraft to AMREF Flying Doctors. The Air Ambulance partnership was the brainchild of Bill Parkinson and senior management of AMREF Flying Doctors, namely Cpt. Jim Heather-Hayes, Aviation Director and Dr. Bettina Vadera, Medical Director. It has resulted in a unique and extraordinary service that is used today by the United Nations and many of the world?s leading Insurance and Assistance companies. The Partnership is now a key
element in the East African emergency services rescuing up to 1000 patients a year and patient repatriations as far as Europe and Asia.

The Parkinson father and son team travelled to Wichita, USA, where they completed their training on the Citation Bravo and together flew Phoenix Aviation?s first jet, which was equipped with Tandem Lifeports for medical evacuations, back to Kenya. 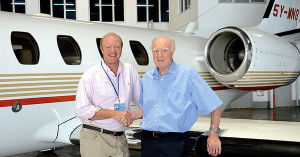 At 81, Bill is finally stepping down from the helm of the ship that he has captained for the past 20 years and is passing the mantle of leadership to his son, Captain Steve Parkinson who will take over as the Chairman. Bill is currently in negotiations to divest his shares to Frontier Services Ltd, a subsidiary of DVN (Holdings), a Hong Kong Stock Exchange listed business engaged in logistics across Africa.

?We owe a debt of gratitude to the Kenyan Government for its efforts to encourage foreign investment in Kenya, which is generating increased employment opportunities and capital helping bring new technologies to the country?, says Bill Parkinson. ?With Kenya labeled the new East African hub, the aviation sector is going to
continue to experience change and growth over the coming years, and it is a very exciting time to be in this industry.?

Bill, whose working life has had many incarnations, will continue to pursue his interests, which include his love of Motorsport. Having twice won the East African Touring Car Championship, Bill still holds the lap record for Nakuru and Embakasi circuit in his 325 HP German works prepared Ford Capri. Today he restores classic
cars and enters them in the CBA Africa Concours d?Elegance. In 2013 his Ford Model A was first overall and his Volkswagen Beetle and Jaguar Mark V were placed in the top four.

The next chapter for Phoenix Aviation, which is still majority Kenyan owned, will no doubt be as exciting and dynamic as the past two decades. Bill will retire delighted that Phoenix Aviation and his nearly 200 employees have a secure and exciting future thanks to the increased investment.

Bill is passionate about Kenya and has lived in this ?remarkable and wonderful? country since the 29th of October 1953. A true Kenyan Mzee.