The ACA has a dedicated working group focused on Sustainability and Innovation, and as the leading air charter industry association we are committed to supporting member companies with efforts to reduce environmental impacts and the introduction of new innovations. Our industry has always led the way with new technologies and is playing a key role in developing the path to reach 'Net Zero'.

Sustainability in Aviation – where are we now?

Aviation is a high profile and visible industry and has attracted a lot of attention, in particular within business and general aviation where lower passenger numbers makes it a higher polluting sector.  However, it is important to look at the data and understand where aviation sits against overall global emissions.  Aviation in its entirety contributes 2% to global greenhouse gas (GHG) emissions.  The Air Charter industry is responsible for only a small part of the overall aviation industry emissions, which are estimated to be 0.04% of global emissions.

It is important to understand that aviation also has additional non-CO2 effects on climate change such as NOx and contrails.  While estimating the levels of additional non-CO2 impact is complicated, it is recognised that these could increase aviation’s GHG responsibility to 3.5%.  Aviation is also growing.

The aviation industry recognises its significant emissions and the urgent need to change and reduce these.  Improvements have already been made and there are now options to increase this change with advancing new technology and innovations.  Aviation is by no means the largest contributing sector and it is important that all industries work on a global level to reduce and remove GHG emissions.

Join our Industry Consultation on Sustainability in Air Charter – have your say here. 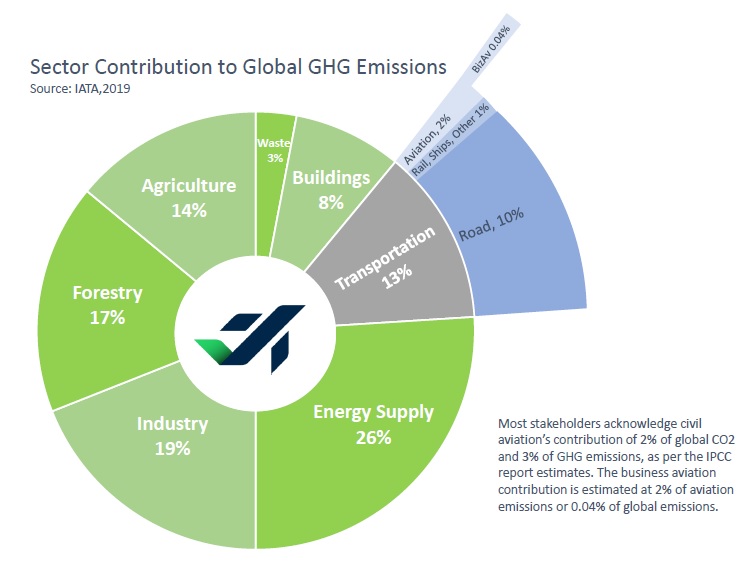 What is being done to reduce GHG emissions in the Aviation / Air Charter industries?

Huge focus and efforts are being placed in sustainable aviation fuels (SAF), emission offsetting schemes and new technology innovations with both electric and hydrogen propulsion.  This is in addition to work that continues with aircraft design and increased efficiency in newer aircraft.

Between 2010 and 2016, passenger numbers in the UK alone grew by 27%, while total emissions grew by only around 0.2%. This is as a result of investment in new aircraft technology, improved air traffic management and airports investing in reduced energy use on airfields.

Countries are pursuing these objectives through ICAO primarily via their development of new global aviation standards. They have also agreed to aspirational goals for international aviation, and have prioritized ICAO’s Environmental Protection resources on:

What is SAF and how does it reduce carbon emissions?

Sustainable Aviation Fuel (SAF) is fuel refined from sustainable feedstocks and is very similar in its chemistry to traditional fossil jet fuel. Some typical feedstocks used are cooking oil and other non-palm waste oils from animals or plants; solid waste from homes and businesses, such as packaging, paper, textiles, and food scraps that would otherwise go to landfill or incineration. Other potential sources include forestry waste, such as waste wood and energy crops, including fast growing plants and algae.

Using SAF results in a reduction in carbon emissions compared to the traditional jet fuel it replaces, over the life-cycle of the fuel (including the CO2 emissions removed from the air by the original feedstock growing). Depending on the calculations used this is estimated to be between an 80% – 85% reduction in carbon compared to traditional jet fuel, depending on the sustainable feedstock used, production method and the supply chain to the airport.

These reductions are calculated based on 100% SAF usage but currently authorities restrict usage to a ‘Blend’ which can be up to 50% SAF v traditional jet fuel.  This blending obviously reduces the overall reduction in CO2 emissions and the actual figure is dependent on the blend used.

SAF is currently approximately 3x more costly than traditional fossil jet fuel. This is due to a combination of the current availability of sustainable feedstocks and the continuing development of new production technologies. As the technology matures it will become more efficient and the price should reduce, thus encouraging greater adoption.

What is Emissions Offsetting & how does it work?

Emissions offsetting, often referred to as Carbon offsetting, is just one tool in our toolbox to tackle climate change and should not be considered as a stand-alone action.

Offsetting emissions is a continuous process, starting with measuring your carbon footprint, setting a strategy to decarbonise your organisation and offsetting residual emissions while you transition to a low-emission operating model.

It is important to note there are big differences in the schemes available.  Some purely measure CO2 whereas others take a more holistic approach and include other greenhouse gas emissions referred to as CO2e (Carbon Dioxide Equivalent).  CO2e is a standard unit for measuring carbon footprints. The concept is to convert the impact of each different GHG into an amount of CO2 that would create the same amount of warming. This enables the carbon footprint comprised of lots of different GHG to be expressed as a single number.  An estimation is that you need to multiply the CO2 emissions by 2.5 times to approximately calculate the CO2e value.

In simple terms, offsetting one tonne of carbon means there will be one less tonne of carbon dioxide in the atmosphere than there would otherwise have been. To offset your emissions, you purchase the equivalent volume of carbon credits (independently verified emissions reductions) to compensate for, or ‘offset’, your emissions.  The payments you make to purchase these carbon credits pay for emissions reduction projects such as improving technologies or changing awareness and behaviours in a community, which reduce global carbon emissions.

What are the sustainable new technologies & innovations?

Aviation’s impact on climate change have become a major driving force for the development of new technologies, with a zero-emissions goal.

The main development areas that are currently being focused on are:

All these new developments take significant resource and time to bring to reality and then need to be trialled and tested to very high levels, to comply with aviation safety regulations.  The pace of their development has been increasing in recent years and several of these are planned to be in the trial and testing phase before 2025.

These innovations will provide truly sustainable options for the aviation industry and it is inevitable due to the initial size and range limitations of the new technology that the Business Aviation and Aircraft Charter sector will be the first adopters and be heavily involved in their further development.