Having worked in the aviation charter industry since he graduated with a degree in Transport Management, Dave’s career has taken him through all areas of the sector, starting in FBOs and moving through flight operations and maintenance into senior executive roles with leading international airlines.

He has led businesses through periods of extensive growth both regionally and internationally as well as in diversifying into different service areas, including charter, aircraft maintenance, ground handling and passenger airline and cargo broking.

Dave recently returned to the UK from the Middle East where he was Executive Vice President of Qatar Airways’ business jet division, following fifteen years in a number of senior management roles at Gama Aviation; as Managing Director, Middle East and Asia and Group General Manager.  Alongside his role at the Association, Dave is a non-executive director for six businesses within the aviation industry.

Dave has, through his various companies, been a member of The Air Charter Association since 1998 and in 2010 was elected as the youngest ever Fellow of the Royal Aeronautical Society.  In addition he is a member of the RAF Club, the Royal Aero Club, the Honourable Company of Air Pilots and the Air League – displaying remarkable narrow-mindedness when it comes to hobbies.  When not playing with aeroplanes he continues to pretend he can play both the trumpet and golf. 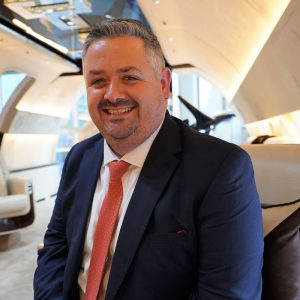