ACS given Charter Broker of the Year award

ACS given Charter Broker of the Year award

Air Charter Service has won the Air Cargo News ‘Charter Broker of the Year’ award at the prestigious Cargo Airline of the Year Awards held on 26th April at the Lancaster Hotel, in the heart of London.

The award is given to the organisation that an Air Cargo News select panel deems most worthy over the past 12 months. This latest accolade joins two other top honours that the broker has garnered in the last year after having picked up Charter Broker of the Year trophies at both the ACW World Cargo Awards and the Payload Asia Awards in 2013. 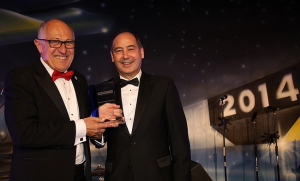 ACS’s Chairman and Founder, Chris Leach, collected the trophy at the gala event: “We are very proud and honoured to have received this prestigious award and to achieve such recognition by the panel, and within the industry as a whole, is the culmination of Air Charter Service’s hard work over the past 12 months and, indeed, the past 24 years.”

Air Charter Service had a busy 2013, some of the highlights included: arranging almost 7,500 aircraft charters, transporting more than 30 million kilograms of cargo and providing vital aid following the devastation that Typhoon Haiyan caused in the Philippines.